Showing posts from November, 2020
Show all

Right away I knew.  Of course, you never really know, do you? Not with epilepsy.  But I knew.  For the first time in eight years, no aura . I was walking out the door, my hand on the knob, when I realized it.  There came a whisper, almost a gasp, and I heard myself say, "Wow." Had epilepsy cleared my system? For five months, instinct had said I was traveling somewhere — to a place where the sun rises within you.  It was gonna be the sunrise of my life. But this  destination looked like nothing. Felt like nothing. It shouldn't have surprised me. Epilepsy is an  invisible illness . E ven, apparently, in remission.  Outgrowing it at 33, I hadn't heard of that. People tend to outgrow it in puberty, not 20 years later. Yes, I had suspicions. They were written in sand. The internal monologue went like this: "I've outgrown epilepsy. I've outgrown epilepsy! Haven't I?" At 13 and 18, I tapered off under doctor supervision — stayed off for 7 and 10 days. I
Post a Comment
Read more 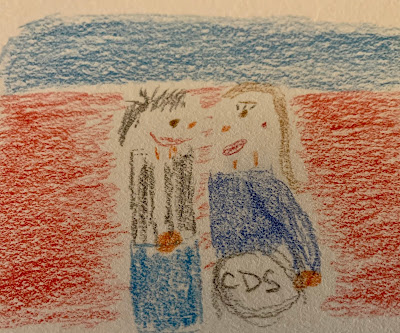 Dennis came in on a revolving door. It ushered him in. More than a year later, it escorted him out. After New York, I never saw him again.  It was for the best, though it never felt that way.  Without him, a chasm opened that wasn't there before. I missed our conversations, the way he made me feel connected. All I wanted was to see the guy again.  That would have required him to be more invested than he could be. I get that now. I didn't then.  After New York , there were a lot of nights where I stayed up thinking about him. I'd feel the electricity in my arms, how it was when we hugged goodbye in L.A., and I'd wonder if he was thinking about me, too.  I wished he'd call. He never did.  One autumn night, there came the soft tapping of rain against the windows. In the dark, with the shadows, it was easy to get lost in the sadness of it all. The glare of the street lights revealed tiny droplets upon the glass. I saw them there and felt the dampness of my own tears.  T
Post a Comment
Read more
More posts